Demographic change is presenting some major challenges. The task of preserving health and quality of life in the elderly is the main focus of the FOPH’s efforts. It is guided by the “Healthy Ageing” strategy published by the World Health Organization (WHO). It is important to take a differentiated view of old age and ageing at all times. 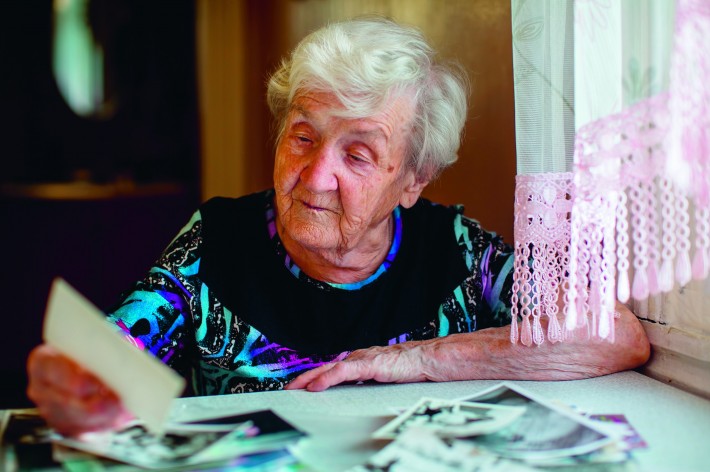 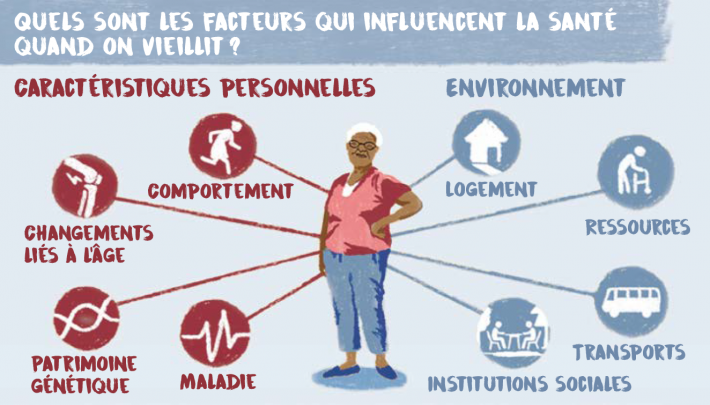 Health in older age is influenced by many factors. In order to age healthily all factors must be taken into account, not just the disease-related ones. Source: WHO

The age structure of the Swiss population will change markedly over the coming decades. Calculations by the Federal Statistical Office show that the proportion of elderly people is set to almost double in the next 30 years. Then almost one in four people in Switzerland will be 65 or older; more than a million people will be 80 or older.

This development first and foremost underlines the success of our society and of medicine. The average life expectancy in Switzerland 100 years ago was 60 years. Nowadays, at that age people still have 25 years ahead of them, usually in good health and living a satisfying life.

A growing number of people today remain fit into old age – both mentally and physically. Our brain is capable of learning and performing to a very advanced age, a phenomenon known to experts as plasticity of ageing. This development potential in the elderly – an important resource – needs to be identified and put to use.

Older people are often more satisfied than people between 30 and 50 years of age, who are dealing on more than one front with a family and a job. Many elderly people remain active in their professions, within their family and in clubs and associations, and this makes them an important pillar of society.

The challenge posed by NCDs
However, the ageing of the Swiss population is also creating challenges for society and the health service. There are a growing number of NCDs (non-communicable diseases) that need to be managed, most prominent among them diabetes, cancer, cardiovascular diseases, respiratory and musculoskeletal disorders and, increasingly, dementia.

Many elderly people have psychiatric problems such as depression, anxiety or impaired sleep. Social isolation is an age-specific risk factor for psychiatric disorders.

No other phase of life is more heterogeneous in terms of capabilities and state of health. Some elderly people are fit, others are frail. The WHO created the concept of Healthy Ageing to take account of this diversity. It defines healthy ageing “as the process of developing and maintaining the functional ability that enables well-being in older age”. Functional ability in this context refers to all the health-related capabilities that enable people to lead the life that is important to them or that they feel is worth living. These are the physical and mental capacities of the individual and relevant environmental factors. The goal is well-being in old age.

Two ideas need to be emphasised in particular here since they also affect the tasks facing the health service.
1. Healthy ageing is an individual process influenced by numerous factors. The risk of limitations increases with age. It is not these that must be used to determine whether a person is satisfied with life, but the available resources.
2. If the environmental level is included, the concept of health moves away from the question of healthcare provision alone and needs to consider other influencing variables. These range from structural factors such as the living situation to the framework created by society, including the question of the image of old age and its impact on the well-being of elderly people.

The WHO ageing strategy
The concept of healthy ageing propagated by the WHO focuses on several areas for action. These include:

•    Forms of living that allow elderly people to stay in their own homes for as long as possible (e.g. caring communities).
•    A system of healthcare provision that focuses less on illness than on the needs of elderly patients (see editorial).
•    Reinforcement of long-term care, with the emphasis on initial and continuing training inputs to cover the expected shortage of care staff.
•    A coordinated system of healthcare provision with networking between the various stakeholders in the health system.

Implementation in Switzerland
A number of the measures described in the WHO strategy are already being implemented in Switzerland. As part of the NCD strategy, for example, the FOPH, the cantons and the Swiss Health Promotion Foundation are pursuing joint objectives in health promotion and preventive healthcare. Activities to coordinate care and achieve health equity are also helping to implement healthy ageing. The FOPH is also turning its attention to family caregivers, seeking to provide them with support and relief wherever possible. The FOPH is promoting an exchange between the stakeholders involved in palliative care.
And at the federal level various institutions are working on age-related questions with relevance for health – the aim being to implement a comprehensive public health policy. Social security, living in old age, adult protection legislation, environment and spatial development are just some of the topics they are looking at. Health-policy efforts are being flanked by activities organised by the cantons, the communes and organisations in civil society. One of the factors necessary for a successful health policy for elderly people, in addition to the cross-sector approaches mentioned above, is effective coordination of these activities – and that means involving those affected directly, the elderly living in Switzerland.

Images of old age
The health-policy focus of the efforts described above is the provision of adequate structures for elderly people, a good quality of life and a high level of well-being. Prevailing perceptions of advanced age are among the factors shaping the societal framework for these activities. Undifferentiated images have a direct impact on the health behaviour of older citizens. Disease-related problems, for example, are viewed as part of getting old, and people may not even consider seeking treatment for them. This narrower perception of old age and ageing ultimately also has an impact on the provision of healthcare and on health promotion.