16.02.2015 The new "SmokeFree" campaign is backed by a broad alliance for tobacco prevention

SmokeFree tobacco prevention campaign. The new version of the broadly based "SmokeFree" awareness campaign launched by the federal government and its partners in the cantons and NGOs aims to motivate smokers to opt for a life without tobacco. The campaign is one of the measures undertaken as part of the National Tobacco Programme (NTP), and over the next three years is intended to establish non-smoking more firmly as the norm in society. 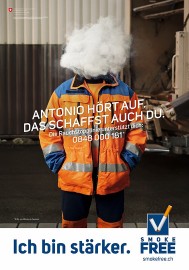 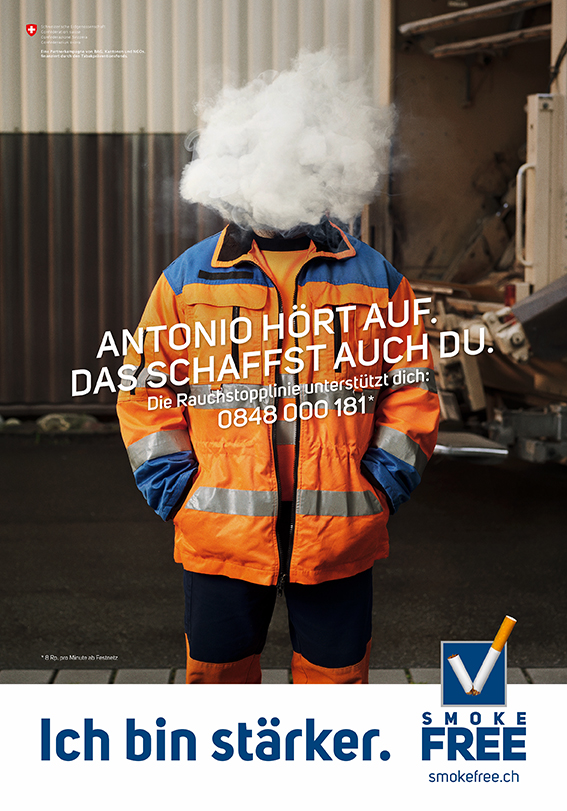 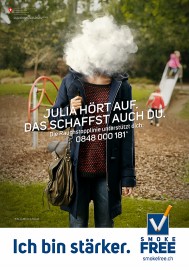 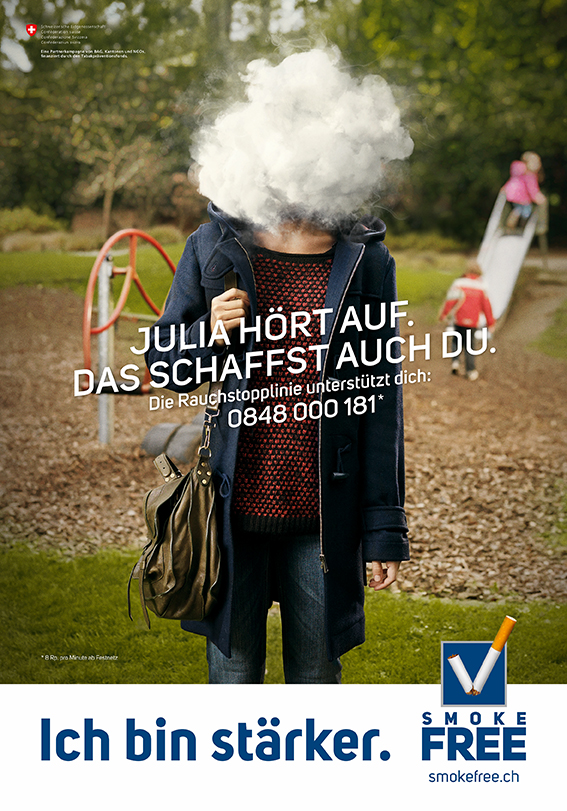 A lot of people want to give up smoking, but the point at which they will start is a far-distant horizon. The campaign consists of posters, advertisements and TV spots that display cloud-covered heads, designed to raise awareness of the dangers of tobacco. Smokers' attention is drawn to existing resources for helping them to give up, including the stop-smoking hotline on 0848 000 181. More than half of smokers say that they want to give up smoking. But the problem is often the lack of a definite decision. The campaign seeks to stop the procrastination and inability to act and to provide targeted assistance with quitting smoking. It motivates people who want to stop and provides them and the people around them with support. People who want to stop smoking should seek help if they need it because giving up is more successful if it's flanked by support from the experts.

Objectives of Swiss tobacco prevention
Swiss tobacco prevention efforts have borne fruit. In 2007 as many as 29% of the population smoked. The percentage dropped rapidly to around 25% but has stagnated at this level since 2008. The aim of the National Tobacco Programme (NTP) is to achieve a further reduction to 23% by 2016. From a health policy point of view, a proportion of 25% of smokers in the population is still too high. Smoking is the number one avoidable cause of death, with around 9,000 people dying in Switzerland every year of the consequences of using tobacco. In addition
to the individual suffering it causes, smoking causes economic damage. The cost of treating the associated medical conditions is CHF 1.2 billion, the cost of lost working days CHF 3.8 billion.

The coordinated mix of measures has the strongest impact
Tobacco prevention is only successful if it consists of a bundle of measures designed to support each other. The NTP combines behavioural prevention measures with structural measures. The Federal Act on Protection against Passive Smoking is a good example of the efficacy of interlocking measures. The tobacco prevention campaign that ran from 2001 to 2009 kicked off a public debate on tobacco and passive smoking that in turn set in motion a process of change in society. Acceptance of structural prevention measures increased as the population became more aware of the problems associated with passive smoking. The introduction of the Act on Protection against Passive Smoking meant that the number of people who had to inhale other people's smoke decreased substantially from 35% in 2002 to around 6% in 2013. Regulatory measures of the kind foreseen in the planned Tobacco Products Acts are also successful in protecting young people. A lot can be gained by preventing them from starting in the first place, since 57% of smokers started before their 18th birthday.
The "SmokeFree" campaign is one of the measures undertaken as part of the NTP. The cost ceiling for the entire project has been set at 9 million francs, which is in proportion to the 5 billion francs that tobacco consumption costs the economy every year. The campaign costs cover its development and production, the three-year duration of the mass media campaign (TV, posters, print, online), two major sub-projects that are being carried out with partners and the costs of scientifically analysing and evaluating the campaign.

"I am stronger. SmokeFree"
The SmokeFree campaign is an umbrella for all tobacco prevention activities in Switzerland. The uniform visual identity with the broken cigarette and the slogan "I am stronger" underlines what tobacco prevention is all about. The SmokeFree campaign is backed by a broad alliance of partners working in tobacco prevention. The campaign strategy was developed and implemented by a steering group consisting in equal parts of representatives of the Federal Office of Public Health (FOPH), the cantons and NGOs. The uniform visual identity of the campaign reinforces the many and varied activities implemented by the stakeholders in tobacco prevention.  Involving all stakeholders makes it possible to adapt the campaign to various needs. Conversely, the campaign benefits from the direct involvement of specialist partners in its development and implementation.
The campaign is divided into three consecutive phases in which the focus spreads from reaching out to and motivating the individual, through social learning to underpinning the norm. By raising the awareness of the public at large, the campaign reinforces non-smoking as the social norm and supports smokers on their way to a smoke-free life. The campaign aims to support people close to smokers in their important role as mediators.

Own projects under a shared roof
The partner campaign forms a visual umbrella for tobacco prevention activ­ities and links the National Tobacco Programme to the large number of partner-based activities taking place throughout Switzerland. All stakeholders in tobacco prevention should be able to run their own projects under the umbrella of the campaign, thus concentrating resources. The SmokeFree campaign offers the partner organisations various options for playing an active part, for example by ordering and deploying campaign materials, implementing a partner-based project or collaborating on a subproject.

"Smoking makes you look old"
The first phase of the campaign, starting in spring 2015, will address smokers and the people close to them. The aim is to underline the negative effects of smoking, thus strengthening smokers' will to stop, and to draw attention to the available support resources. The campaign centres on two TV spots, as this channel can reach a very wide audience. One of the new spots plays on the premature ageing caused by smoking: the colleague whose 43rd birthday is being celebrated in the office has actually just turned 34 ... The other spot focuses on smokers' lack of condition: it shows a group of people on a cycle tour, with the breathless smoker lagging well behind.