21.02.2019 Developing a shared understanding of health

It takes more than just health policy to improve the health of the population. This is because many of the factors that influence health lie outside the healthcare system. A comprehensive approach driven by partnership between the FOPH and other federal offices and agencies is essential. Most importantly, all stakeholders need to develop a shared understanding of what health means. 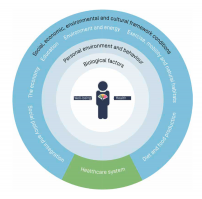 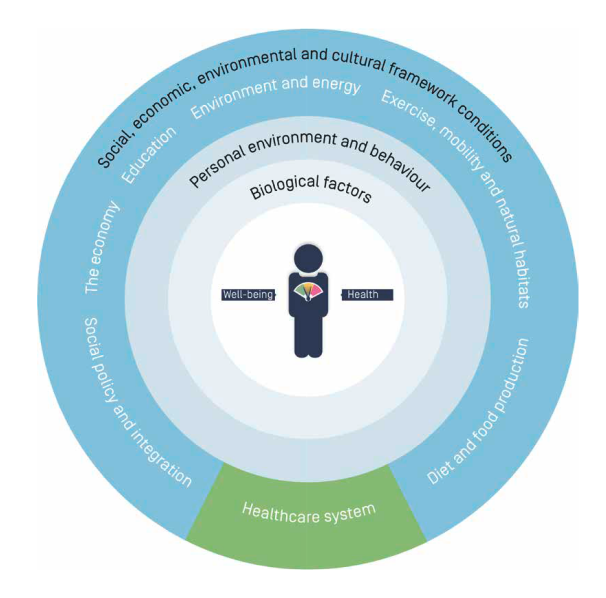 The healthcare system is only one of many determinants of health. Much of what constitutes health is determined by factors outside the healthcare system. The three levels “Biological factors”, “Personal environment and behaviour” and “Social, economic, environmental and cultural framework conditions” are in a constant interactive relationship. Individuals can only shape their environment to a limited extent, and there are certain factors that impact their health on which they have very little or even no infl uence. 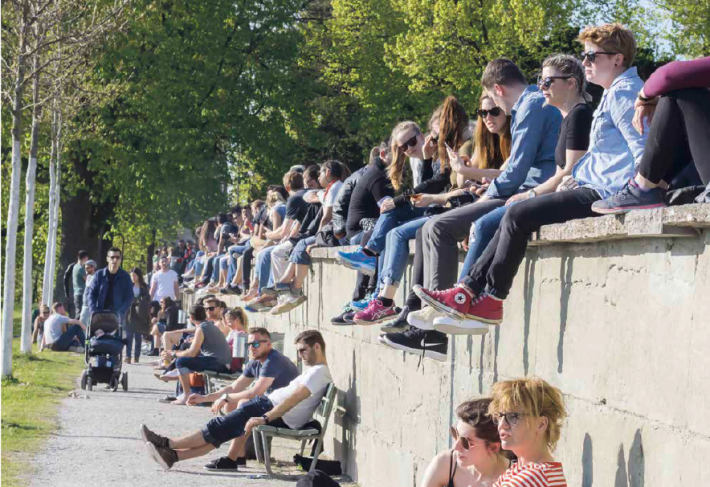 An intact environment is conducive to good health. Conversely, the environment can also be detrimental to health. Noise and air pollution are examples of this – as are heatwaves, which can have severe consequences for the elderly in particular.

The primary source of health is our everyday environment – in other words the places where we live, learn, eat, play, ride bikes, work and love. People’s health is influenced by a large number of different factors known as determinants of health (see illustration). The first of these are personal determin­ants, such as inherited dispositions, social environment and individual health-related behaviours. However, social, economic and environmental conditions also have a direct or indirect influence on health. Specifically, we are talking here about determinants such as income, education or air pollution.

•  People on a low income are almost twice as likely to have diabetes as people who enjoy a high income.
•  Well-educated people are generally healthier than those who left school after completing their compulsory education.
•  Around 3,000 people die prematurely in Switzerland each year because of air pollution.

Road noise, heat and access to guns can also have an impact on health. The examples show firstly that there is an uneven distribution of health in Switzerland – in other words that not everyone who lives here has the same opportunity to enjoy a long and healthy life. They also show that health is a subject that impacts many policy areas, not just health policy. Determin­ants such as income, education and air quality are largely shaped by policies outside the realm of health policy itself – in other words, in areas on which the FOPH has relatively little influence.

According to the “Health2020” report, which sets out the Federal Council’s health policy priorities, “the state of people’s health in Switzerland is determined up to 60 per cent by factors not related to health policy.” Health policy measures in the strict sense therefore often do not go far enough or are subsidiary to political measures and trends in other policy areas. Consequently, health policy cannot by itself alleviate the problem of a lack of health equity. Resolving the issue requires a broader focus that extends beyond health policy plus measures that are implemented outside as well as inside the healthcare sector.

Effective health policy must act at a broad political level and transcend all federal offices and agencies by aiming to ensure that important decisions such as revisions of acts and ordinances take account of health-related considerations. This is the aim of Health in All Policies (HiAP), of which the “Health2020” report says: “These social and environmental deter­minants need to be improved specifically at the federal level by intensive collaboration between the departments involved.”

It should be noted here that there are determinants that individuals can influence, such as diet and exercise, and others that they have limited influence over, such as work and income. And there are even certain determinants that individuals are more or less powerless to change, such as the global economic situation or whether they live in a state of war or peace. Responsibility for health does not therefore lie solely with individuals, but also with various policy sectors, businesses and society itself.

Focus on six subject areas
The FOPH’s efforts to implement Health in All Policies are focusing on six subject areas that have been defined jointly with the Department of Home Affairs. The aim is to intensify and adopt a more systematic approach to collaboration between other federal agencies in these six areas, which are described briefly below.

1. Environment and energy
Ensuring the environment (soil, air, water, recreational space) stays as intact as possible is a good way to promote health. Conversely, the environment can also be detrimental to health. Noise and air pollution are examples of this, as are heatwaves, which can have severe consequences for the elderly. Residues from medicines (hormonally active agents) and antibiotic-resistant bacteria are a further problem, as are elevated concentrations of radon inside buildings, to name a few examples.

2. The economy
The economy and health are closely connected. For example, economic crises and the associated redundancies can have a major impact on the health of affected workers and their families. Stress and back problems are an illustration of how work can make people sick. On the other hand, good working conditions and a healthy workplace improve people’s health and give them self-confidence and strength. Work can also play an important role in bolstering mental health.

3. Diet and food production
Diet is closely linked to health. Non-communicable diseases (NCDs) are becoming increasingly common in Switzerland. Three of the main factors that play a causal role in NCDs – high blood pressure, excessive cholesterol and obesity – are diet related. Infected food can also help to spread dangerous germs such as gastroenteritides and listeria.

4. Education
The way babies, children and young people are raised and schooled has a major influence on their lifestyle and health in adulthood. This is firstly because children acquire health skills at school, and secondly their success at school and the level of education they achieve influence their choice of career, income and the place where they live. This in turn has a positive or negative effect on their health.

5. Exercise, mobility and natural habitats
Exercise plays a key role in the prevention and treatment of non-communicable diseases (i.e. diabetes, cancer and respiratory, cardiovascular and musculoskeletal diseases). Exercise also helps to overcome mental problems such as stress, anxiety and depression, as well as contributing to physical and mental autonomy at all stages of life.

6. Social policy and integration
Social security and integration are key determinants of health. Social groups in Switzerland differ significantly as regards their state of health and health-related behaviours. Poverty, discrimination and social exclusion are directly detrimental to health. Socially disadvantaged groups are more likely to be exposed to living, working and environmental conditions that are damaging to their health. Problematic substance abuse – particularly alcohol addiction – can lead to social isolation, unemployment and poverty.

Improving general conditions
In all these subject areas, the FOPH is endeavouring to partner with other federal offices to improve general conditions so that they are conducive to the best possible level of public health. In so doing, it is not setting out to take the lead in as many of these policy areas as possible. Instead it hopes above all to raise issues and concerns at the right time and in the right place, and assist other federal agencies in implementing solutions that have a positive effect on the health of the population. Specifically, this will take the form of official consultations, for example, or by joining working or project groups set up by other federal agencies. Last but not least, the aim is to ensure that all stakeholders develop a shared understanding of what health means.

More about Health in All Policies, see spectra 123