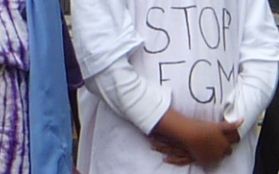 An increasing number of women from countries which practice female genital mutilation are migrating to Switzerland. A report compiled in response to a parliamentary initiative (05.3235) put forward by National Councillor Maria Bernasconi states that an estimated 14,700 girls and women who are affected or at risk (primarily from Eritrea, Ethiopia and Egypt) live in our country.

In a survey carried out in 2012, four out of five gynaecologists and two-thirds of midwives said that they had encountered girls or women who had been circumcised. One third of individuals working in the health, asylum and social sectors who took part in the survey stated that they had already encountered a situation in their everyday work in which a girl was in danger of having her genitals mutilated. Genital mutilation can seriously affect the health of girls and women who undergo it and is classified as aggravated bodily injury in Switzerland.

The Federal Office of Public Health (FOPH) and the State Secretariat for Migration (SEM) have been supporting a number of prevention and awareness-raising activities designed to counter female genital mutilation since 2003. Key among them is a central advisory office run by the Swiss branch of Caritas and dedicated to preventing the circumcision of girls. During the coming years the FOPH and the SEM are planning to help fund the information, advisory and prevention activities of a network that will be set up and operated by a number of organisations.