An investigation by the Federal Office of Public Health has revealed that the air quality in around two thirds of schools is unsufficient, even though good air quality in classrooms is important for students’ intellectual capabilities and health. Now schools and their teaching staff can access good ventilation recommendations and other resources such as the Simaria ventilation simulator. 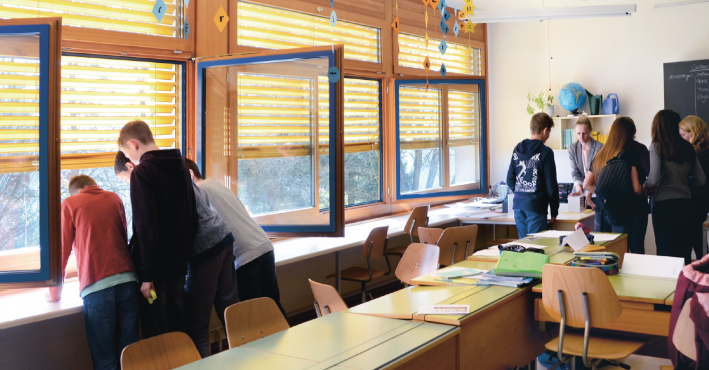 Through systematic, efficient airing, the air in classrooms can be immediately and significantly improved.

Classrooms are used intensively and there are generally a lot of people in them at the same time. They therefore require regular ventilation. Bringing fresh air into a room prevents the air quality from deteriorating. However, as a representative investigation shows, there is a need for action in Swiss classrooms with window ventilation. In partnership with municipalities in the cantons of Bern, Graubünden and Vaud, the FOPH measured the carbon dioxide concentrations in 100 classrooms continuously for a period of four days. It is known that air quality deteriorates perceptibly as carbon dioxide levels rise. This is because when people breathe out, they not only exhale carbon dioxide, but, owing to metabolic processes, also a large number of other substances that have a detrimental effect on perceived air quality over time. Unlike carbon dioxide, many of these substances have an odour and make rooms smell stuffy, stale or musty. In addition, they have a negative impact on the intellectual performance and concentration of students and teachers alike.

Contrary to popular belief, classrooms are not ventilated to let oxygen in. Since oxygen accounts for one fifth of the air around us, it is rarely ever in short supply. Instead, ventilation is about letting stale air out and replacing it with fresh air. Stale air makes students feel tired and can even give them headaches. Performance declines if air quality is poor. Conversely, good air quality in a room has a positive effect on academic performance and concentration. Another reason why good air is important for health is that it makes asthmatic symptoms and mucous membrane irritations less common.

Situation deteriorates as the day progresses
While the investigation revealed that most schools actively ventilated, they often did so spontaneously, for too short a period and non-systematically. Due to ventilation classroom air quality is often good when classes start in the morning. However, if the windows are kept closed, quality can fall rapidly in the course of one lesson. If rooms are not adequately ventilated during breaks, the air in them cannot regenerate sufficiently, and the situation continues to deteriorate. Since the hygiene limit of 2,000 ppm carbon dioxide was exceeded for more than 10 percent of teaching time, the air quality in more than two thirds of all classrooms was unsufficient. Furthermore, in one third of classrooms, carbon dioxide levels exceeded the hygienic limit value for more than 30 percent of total teaching time.

However, as the second phase of the FOPH's investigation showed, the air in classrooms with natural window ventilation can be immediately and significantly improved if rooms are systematically and efficiently aired. Using the free online ventilation simulator Simaria (www.simaria.ch), a trial involving 23 school classes was carried out. This pilot project adopted a fun approach to calculating how long classrooms need to be aired during breaks to ensure sufficient fresh air gets into them. The simulator shows clearly that both class size (i.e. the number of people in the room) and room volume have a major impact on air quality.

Immediate action successful
The classes that took part in the trial used Simaria to create ventilation strategies adapted to their particular classroom. In addition, they also looked at and followed general recommendations for efficient ventilation, such as having all windows wide open, but always keeping the classroom door closed (to allow fresh air from outside to flow into the room, rather than stale air from the corridor).

Repeat continuous measurement of carbon dioxide levels demonstrated the efficacy of the measures. Air quality was sufficient, showing unacceptable carbon dioxid values for only 9 percent of teaching time, as opposed to 31 percent at the outset. At the same time, the percentage of teaching time when carbon dioxide values were good (1000–1400 ppm)  or excellent (<1000 ppm) rose from 40 to 70 percent. Feedback from the classes who took part in the trial confirmed that the students appreciated the fresh air and felt more awake and productive overall. However, some found the cold draught a source of discomfort. For this reason, students should be able to leave classrooms while they are being aired on particularly cold days. However, that means teaching staff pulling together to come up with shared solutions. For example, corridors are only a suitable place for children to spend time if all classes have their breaks simultaneously, as used to be the case in the old days.