07.03.2016 Improved access and respect for human rights in the treatment of opioid dependence

Pompidou Group. In many countries, the prescription of opioid medicines such as methadone or buprenorphine is subject to rigorous restrictions. An expert group of the Council of Europe's Pompidou Group, the international cooperation group to combat drug abuse and illicit trafficking in drugs, has now spoken out in favour of a paradigm shift: decisions to permit or prohibit the prescription of opioid medicines should be based on scientific findings and respect for human rights rather than on a repression-oriented approach. These medicines are the best possible treatment for large numbers of dependent opioid users, and therefore, in compliance with human rights, access to them should not be withheld or subjected to restrictions. On Switzerland's initiative, the experts nominated by participating Pompidou Group Member States are drawing up guidelines to help member states review their regulations on this form of therapy. Switzerland has been mandated to head this project. 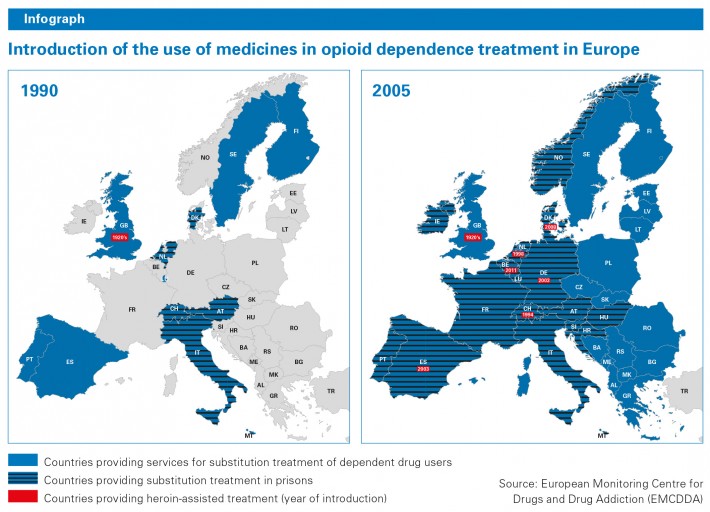 A 2012 comparative study commissioned by the Swiss Federal Office of Public Health (FOPH) showed that European countries differed widely regarding the legal framework for the prescription of medicines to treat opioid dependence. In many countries, restrictive regulations create obstacles to the use of "agonist medicines" (AM) such as methadone or buprenorphine or prevent it altogether. This is probably due in large part to the still widespread misconception that the use of medicines in opioid dependence treatment (ODT) simply involves the replacement of an illegal drug by a legal one. But this understanding is medically and scientifically erroneous: AM/ODT reduce or eliminate the hedonistic effects of the illegal drugs primarily responsible for the development and continuation of dependence. The availability of AM/ODT minimises the overdose risks and substantially reduces mortality and comorbidities such as HIV or hepatitis C. Consequently, they provide a basis for improving the quality of life and the social reintegration of dependent users, and are therefore a central element of integrated medical and psychosocial treatment of opioid dependence.

There is consensus in the Pompidou Group (see box) that, in the light of the scientific findings and human rights considerations, all dependent opioid users with the corresponding medical indication should have access to AM/ODT. The Group has therefore decided to draw up a set of guidelines for the use of AM/ODT. The guidelines are designed to help national health authorities review their regulations on the prescription of AM/ODT and thereby satisfy human rights requirements by meeting their obligations relating to healthcare and the prevention of discrimination.

Switzerland is to play a key role in the drafting of the guidelines: at the suggestion of the FOPH, the Pompidou Group has decided to launch a corresponding project. The project is headed up by Swiss experts on dependence and involves the participation of professionals from twelve countries in Europe, North Africa and the Near East.

The guidelines are currently available in draft form. The definitive version is expected to be completed by the end of 2016 and, in addition to the points referred to above, will contain a report featuring detailed arguments.

The Pompidou Group is a cooperation group whose core mission is to contribute to the development of multidisciplinary, innovative, effective and evidence-based drug policies in its member states. It was founded in 1971 on the initiative of the former French President Georges Pompidou and was integrated into the Council of Europe in 1980. The Pompidou Group currently consists of 37 member states.