The Do-Health study is looking at ways of improving the chances of ageing in good health. The largest-ever European study of health in old age is nearing completion. The initial results show the following: half of the participating senior citizens from Switzerland belong to the category of “healthy agers”, meaning that they have no chronic diseases and are in good physical and mental health. 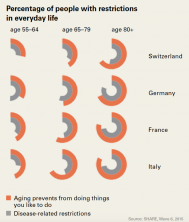 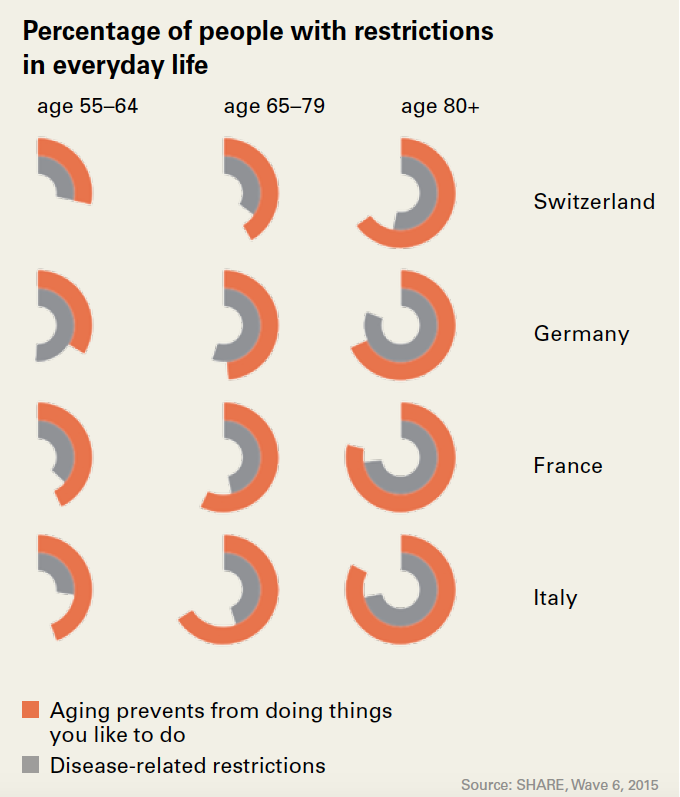 Do-Health is the largest-ever study of the elderly in Europe focusing on the topic of healthy ageing. It was launched in 2012 with the aim of extending healthy life expectancy in the over-70s. 2,157 senior citizens from Zurich, Basel, Geneva, Toulouse, Berlin, Innsbruck and Coimbra took part in the study.

It focused on three strategies for extending the healthy and active phase of life: regular intake of vitamin D (2,000 IU/day) and omega-3 fatty acids (1 g/day) and a simple training programme to follow at home. The Do-Health study is specifically investigating whether these three measures reduce the risk of bone fractures and the frequency of infections and whether they improve muscle function and memory. All three interventions have demonstrated a protective effect on various organ functions in previous studies.

One feature of the Do-Health study is that it records in detail the overall health of the subjects over a three-year period. The study has now been completed and the initial data have been evaluated. An overview of the examinations performed when the subjects were enrolled in the study showed that 42 per cent of the Do-Health senior citizens are what is known as “healthy agers”. This means that they have no chronic disorders and are in good physical and mental health. The figure is as high as 51 per cent for the 1,006 participants from Switzerland.

“If the efficacy of the three well-tolerated and affordable measures can be demonstrated, this will be of enormous significance for public health,” said Heike Bischoff-Ferrari, head of the Do-Health study and a professor at Zurich University. She hopes that the study will show people over 70 ways of staying healthy and active for longer. Bischoff-Ferrari is not able to talk about the results in detail yet since the study is due to be published in the summer. But she is confident that “they’re going to be really exciting”.

Evaluation of the data will also enable conclusions to be drawn regarding the extent to which the three therapeutic interventions studied affect the use made of healthcare resources (e.g. the number of hospital stays, visits to doctors or physiotherapy sessions).

The Swiss population is ageing largely free of pain
Differences of this kind are also the focus of a multidisciplinary international comparative survey that goes by the name of SHARE (Survey on Health, Ageing and Retirement). In this longitudinal study the same households have been interviewed repeatedly for over ten years. SHARE has enrolled more than 120,000 people from 27 European countries and Israel. Data from around 4,600 people in Switzerland are available. This information documents the changes in the economic, health and social situation of people over 50 in an European comparison.

The data from the SHARE study show that the majority of people in Switzerland are ageing without pain. However, chronic, non-communicable diseases become more significant with increasing age. Cardiovascular diseases affect more men than women. Women are more likely to suffer from arthritis and rheumatism. Around one fifth of people over 55 in Switzerland have two or more diseases concurrently. Multimorbidity increases with age, affecting a good third of 83- to 89-year-olds. The study shows that men do not live to be as old as women, but they do enjoy better health for longer.

There is a distinct difference between the sexes when it comes to alcohol consumption. Twice as many men as women (41 vs 19 per cent) had drunk at least one glass of alcohol per day in the week before the survey was carried out. Men generally drink more than women both in Switzerland and in Europe as a whole.