Stop-smoking hotline. The tele-phone number of the stop-smoking hotline is on every packet of cigarettes or tobacco in Switzerland. At the other end of the line, callers will find people who know how hard it is to beat this addiction – and how they can nevertheless succeed with the right support.

Pictures Stop-smoking hotline: "We don't lecture or judge anyone" 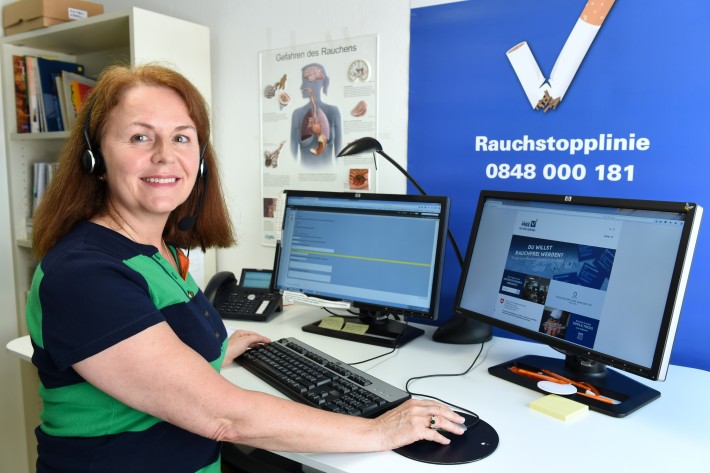 Pictures Stop-smoking hotline: "We don't lecture or judge anyone" 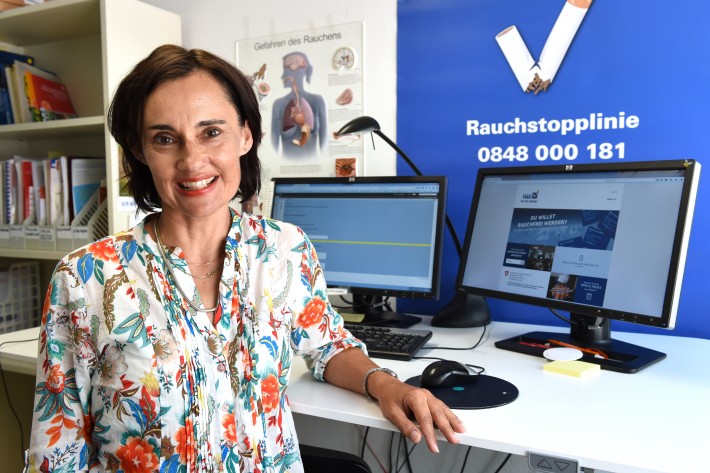 The counselling on how to stop smoking focuses entirely on the individual needs of the callers – there isn't a one-size-fits-all approach. Many are looking for specific information, such as about nicotine replacement products, some want to have a single, in-depth conversation and yet others are looking for support over a longer period. In this case, the caller and the counsellor may agree that the counsellor should call every fortnight, for example. "Many people trying to quit find it helpful to know that someone is going to ring up and ask how they are getting on. This establishes a commitment, which helps people stick to their plan," explains Sabine Jenny, project manager of the Stop-Smoking Hotline.

"Motivational discussion" is the special name for one of the methods used by the hotline counsellors when speaking on the phone to people trying to quit smoking. This is a recognised interview technique that helps people gain more clarity. "The people who call us often still feel very torn. They want to give up the habit, but are worried about 'suffering' or failure," says Sabine Jenny. Ideally, it becomes clear to the caller during the motivational discussion that their desire to stop smoking outweighs their fears.

Not just a "cosy chat"

Callers thus achieve a clear inner willingness to stop smoking, and this is crucial to their success. "We never lecture or judge anyone if they don't really want to stop. We know that smoking is highly addictive, and that it isn't easy to change a habit," stresses Sabine Jenny. Nor does anyone have to listen to sermons about the dangers of smoking when they ring the hotline. For Sabine Jenny, it is important for people to understand that counselling can really help, and isn't just a "cosy chat". According to a follow-up survey carried out in 2014, about a third of the callers who received counselling were smoke-free 12 months after their first telephone call.

Suddenly they're not having a cigarette after a meal, during breaks at work, at the bus stop, when they're going out or while on the phone. When someone stops smoking, they have to reprogramme their daily routine. At first, the missing cigarettes tear a lot of holes in everyday life, and these have to be bridged or circumvented if relapses are to be prevented. The stop-smoking hotline counsellors can help here, too. They discuss with callers how they can cope with tricky situations and keep the intense craving for a cigarette at bay. In this way, a host of everyday situations have to be practised until new habits are formed. People who want to quit can talk to the counsellors to explore what will help them. This includes deciding whether to make use of aids such as nicotine patches or other medication, and how family, friends and colleagues can provide support.

Success doesn't have to be instant Many smokers ring the hotline after repeated attempts to quit. "We recognise that success isn't always instant, and we give clients praise for all their past and present efforts to beat their addiction," says Sabine Jenny. This is an important step, because when people blame themselves or beat themselves up for relapsing, they become stressed, which only encourages them to turn to their addiction again. Sabine Jenny also advises clients not to fight against wistful memories of being a smoker: "You should simply allow yourself to have these thoughts and tell yourself: 'Yes, when I was a smoker I would have been having a cigarette now. That's how things used to be. But now I'm in a different place.'"

This advice on how to quit smoking has been offered by the Swiss Cancer League in cooperation with Arbeitsgemeinschaft Tabakprävention (the Swiss Tobacco Prevention Working Group) since 2005, and is free to callers, regardless of the type and frequency of counselling, apart from telephone charges of eight cents per minute (for calls from a landline). Help with stopping smoking is offered in nine different languages on several telephone numbers (see box). The counsellors, who conducted nearly 3400 professional counselling sessions in 2014, all have basic training in social work or the care sector, or a degree in psychology, and have also completed basic training in counselling smokers on how to stop. The Stop-Smoking Hotline is financed by the Tobacco Prevention Fund.

Advice on how to stop smoking – in 9 languages