Packages of drug measures. Switzerland's four-pillar drug policy is still a commendable example for many countries in their approach to drug problems. These are some of the impressive achievements over the last twenty years: open drug scenes have disappeared, while drug-related deaths, the HIV infection rate and drug-related crime have all decreased and public safety has improved. The drug problem has not been solved, but Switzerland has found a pragmatic, healthoriented and humane approach to the drug problem. The third package of drug measures expired at the end of 2016. As part of the National Addiction Strategy, which includes all types of addiction, the four-pillar drug policy will be developed further into the four-pillar addiction policy. 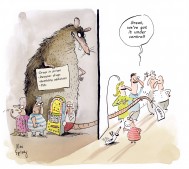 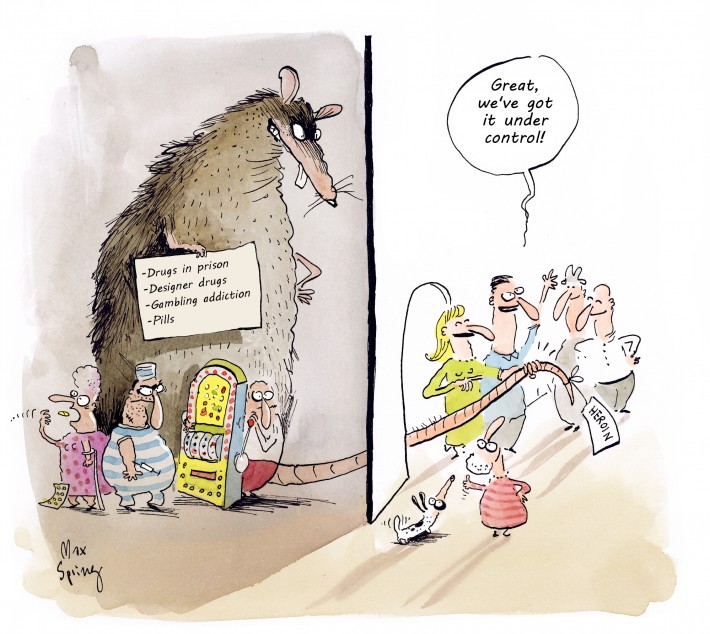 The origins of Switzerland's drug problems date back to the time of the 'flower power' movement, which made the use of illegal drugs a symbol of rebellion against the establishment. The first wave of drug use reached Switzerland in the late 1960s. The Swiss authorities were alarmed by this little-known phenomenon, and responded promptly with measures that were primarily repressive at the start. In 1975, a revision of the Narcotics Act made drug consumption as well as drug dealing punishable by law. The first drug-related inpatient and outpatient facilities were constructed during this period, usually as private initiatives.

Packages of drug measures I and II

The Swiss drug policy was initially based on three pillars – prevention, treatment and particularly social repres- The Swiss drug policy – a pioneer model sion. In the late 1980s, the cities (which had suffered most from the publicly visible effects of the drug problem) supplemented the policy with harm-reduction programmes. It was primarily a question of protecting drug addicts against death or impoverishment due to drug use, and of curbing the spread of Aids. Increasing pressure from the public and in particular from the media, which portrayed Switzerland as a drug haven, initiated a change in the attitude of Swiss society and politics.

As a result, the first drug injection sites, syringe exchange projects and basic accommodation, workplace and assistance programmes, such as help points, were established. This was a paradigm shift, because the assistance programmes were no longer designed just for drug addicts who wanted to quit, but also for those who were not (yet) ready or willing to do so.

The federal government responded to this development (initiated by the cities) and gave the four-pillar drug approach a conceptual framework with the federal government's first 'Package of measures to reduce drug problems' (MaPaDro I, 1991–1996). This was carried out under the auspices of Ruth Dreifuss, who was then a newly elected member of the Federal Council and saw commitment to the drug policy as particularly important. She supported the four-pillar drug approach strongly against political resistance, which was initially very strong. The primary focus of MaPaDro I was reduction of the heroin problem. Addiction medicine received particular support, such as treatment supported with heroin and methadone, medically supervised contact points and drop-in centres with injection rooms, syringe exchange programmes and facilities for medication- assisted withdrawal.

If the focus of MaPaDro I was development and establishment of the four-pillar drug approach, the second package of measures (MaPaDro II, 1998–2006) was intended to consolidate the policy and apply it throughout Switzerland. The success of this drug policy is also reflected in the perception of the drug problem by the population. In the early 1990s, 74 percent of people living in the country regarded drugs as one of the five biggest problems in Switzerland; but the drug problem has now dropped to number 17 on the 'worry barometer' of the Swiss population. It has been possible to reduce the drug problem to a socially acceptable level. There will probably never be a complete solution, because taking psychoactive substances has always been an important societal and cultural issue in one form or another. However, it is remarkable that Switzerland has found a humane way of dealing with this extremely complex social problem.

The major insight of the first two packages of measures was that the success of the four-pillar drug approach was mainly due to improved coordination between the measures of all four pillars. Particular importance was attached to the interactions between repression and harm reduction. Accordingly, the third package of measures focused on inter-pillar cooperation between public health and public safety. The third package of measures was thus the first to be supported not only by the Federal Office of Public Health, but also by the Federal Office of Police and the Federal Office of Justice. The associated increase in cooperation between the police and addiction support services, both at federal level and in the communes, amazes people in many countries. The professional priorities of MaPaDro III were to establish an approach to prevention that addressed all forms of addiction, and in particular the concept of early detection and intervention. Special attention was given to quality development and the further training of skilled personnel. One of the developments for this purpose was the QuaTheDA quality standard.

From heroin to synthetic drugs

In the 1990s, heroin had disastrous effects on many of its users, which included physical injury and diseases such as Aids, hepatitis C and all too often death. In addition, it almost completely destroyed the societal and social lives of those affected in many cases. But today many other substances such as cannabis, synthetic drugs and cocaine are used, and consumption patterns have also changed.

Expansion of the nocturnal economy is generating increasing problems with synthetic drugs and cocaine, with violence and sexual assault as well as littering and unpleasant noise levels in public spaces. These problems are caused not only by illegal drugs but also by alcohol.

The current drug problem in public spaces is therefore inextricably linked to issues of public order and safety. In future, there will therefore be an increased need for cooperation between the areas of repression, addiction prevention, harm reduction and treatment.

These days, the open drug scene is barely visible. However, the Internet has become much more important with regard to drugs. This is partly due to the trade in illegal drugs, where all kinds of illegal substances are available for sale on the so-called Darknet, and partly because Internet users gather information on substances and discuss their effects with one another. However, the anonymity of the Internet also opens up new opportunities for addiction support. In particular, recreational drug users are easier to contact via the Internet than in the real world. The online portal SafeZone.ch, which is supported jointly by the cantons and the federal government provides Internet-based addiction counselling for addicts and their families.

This development makes it clear that the drug problem is no longer an isolated phenomenon, but is linked to a variety of other societal problems.

We cannot predict how addiction problems will manifest themselves in future. New psychoactive substances, medications, gambling, excessive risk-taking, the Internet, neuroenhancement, medical use of illegal anaesthetics and narcotics, cannabis regulation – all these topics are changing constantly and will present us with new challenges.

There will always be people who are unable to behave in a healthy and socially responsible manner with legal or illegal addictive substances. To abandon measures for prevention, harm reduction, therapy and regulation would therefore lead sooner or later to a renewed increase in drug and addiction problems. Preventing such an increase is the goal of the National Addiction Strategy, which encompasses all forms of addiction and was approved last year by the Federal Council. This strategy is the logical development of the three packages of measures (or the recognition expressed therein) as ultimately, it is not the substances that are the real problem, but the banal and potentially fatal failure of human beings to recognise when more is too much.